Two years ago, a menacing killer clown terrified the town of Derry, Maine until a group of intrepid kids was able to overcome their fears and end his reign of terror.
27 years later, Pennywise is back, and the exact same thing happens.

Therein lies the problem with this second installment of It, as well as any potential adaptation of this novel split into two parts- one with the kids, the other with the adults. It is the same story two times. A freaky clown terrifies a town until a group of people are able to get past their fears and defeat him. The build-up and pay off of both sections is exactly the same. As a result, the climax of the second installment lacks punch, as we already had it two years ago. See the review of the first It, for most of the nitty-gritty of this film.

That covers most of the film. The actions are nearly identical- in both cases the characters have to split off on their own and each face Pennywise by themselves before learning that they have to face him down together if they are going to be victorious. 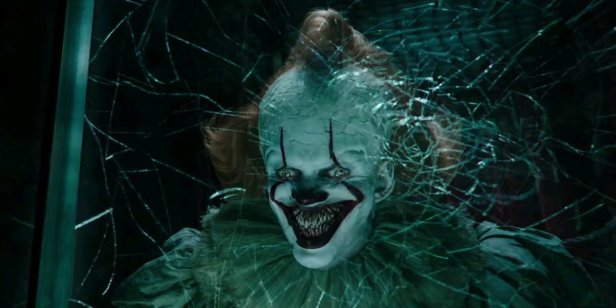 Pennywise is still a pretty freaky chap, and it would have been great to get a bit more of him in this second installment, as it feels like there is still some untapped potential from this version.

What differs is the ending- not in terms of the climax being tonally or contextually different, as it is the same, but it is different in terms of weirdo alien/interdimensional creature/native people’s ritual that takes place. This part of the film is messy, and it was always going to be messy. Back in 1990, when the television special aired, the final confrontation with Pennywise saw him turn into some kind of bizarre spider-scorpion creature before getting shot by a slingshot. It was funky.

There was no way that this film could go down the same route, so they went with Native American rituals instead. It turns out, that when space creature Pennywise first arrived on earth, a group of people were able to conduct a ritual to trap him in a jar like my man, Master Roshi. Needless to say, it don’t work. Instead, they resort to a much more dramatic means of ripping out his hear through the power of friendship and crushing it with the power of their fists. Throughout the battle, there are clues as to Pennywise’ true form, as he uses monstrous appendages, and vestiges of something even more inhuman.

However, once again, almost all of that is present in the previous film. Well, the power of friendship wasn’t as gruesome, but out plucky protagonists still had to band together against a Pennywise who was taking and increasingly more monstrous form. This time he is larger, and there is a flashier light show, but this is otherwise a second helping of something we’ve all seen already.

It is still a finely put together film, with plenty of spooks in the form of some jump scares to keep people on their toes, but it is a very fleeting experience without being able to differentiate itself from its predecessor.