14 years ago, one of the most infamous films of this century, and possibly in the history of U.S. cinema was released. It has garnered legions of fans who will watch it over and over and over again like a never ending ritual. They bring props, recite lines and recruit their friends to take part in this cult which has become one of the largest of its kind.

I am of course, talking about The Room.

Originally released in 2003 and produced by, directed by, written by and starring Tommy Wiseau, one of the most fascinating people in the Hollywood history. The film is famously bad, so much so, that is has gone on to be one of the very rare, so-bad-its-good films which includes other gems such as Troll II, Samurai Cop and the entire filmography of Ed Wood. 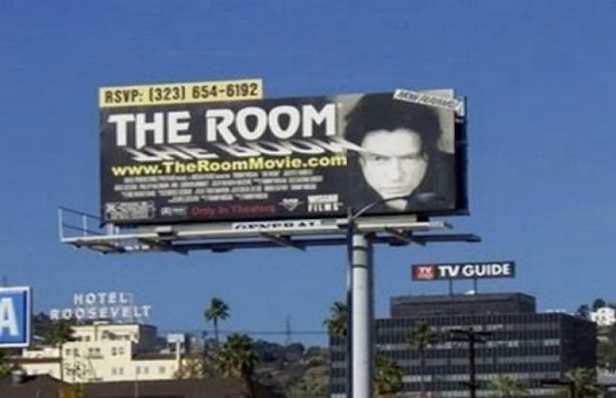 Tommy Wiseau’s famous sign which became a staple in Las Angeles as it stayed up for years following the film’s release.

The beauty of these films is that no one set out to try to make the worst film possible; they were aspiring artists wanting to make the greatest film they could. These filmmakers had no talent, so the films were horrible, but at least they were earnest. It is that journey of these folks to make the best film they possibly can that leads to tales of the making of these films such as The Room, and it is this story which leads us to The Disaster Artist, a film about the making of The Room which, like its inspiration, is better than some would expect.

Heading into The Disaster Artist, it would be easy for one to expect it to be a complete farce. Wiseau is a notoriously strange person, and he is being portrayed by James Franco with recurring partner Seth Rogen also in tow with a series of other comedic actors making smaller appearances throughout the film. It is easy to expect this film to be Pineapple Express featuring Tommy Wiseau.

The oft maligned James Franco, prior to being accused of being a creepo, gives one of the best performances of his career as Wiseau.

Fortunately, the film takes it self far more seriously than one might initially expect. Franco and company take the portrayal of this man and his story seriously and don’t ever make attempts to create humor as his expense. Sure there are moments where he is the butt of jokes, but it never feels like Wiseau is being made fun of in the film. The film is still a comedy, but it is all derived from the raw absurdity of everything that takes place in the process of trying to make this film. Wiseau is a torrent of weird and bizarre behavior that, like hi, does not have any discernable place of origin, and so much of the comedy in this film comes from the interactions of an exceedingly strange man with a bunch of normal people who are trying to understand.

All of the comedy flows nicely within the framework of the film, and it never takes a timeout to disrupt a scene in order to work in a joke to fulfill a quota. It all feels very natural and logical within the film with no moments leaving folks in the audience wondering what the heck is going on.

The greatest strength of the film is, like The Room and other films which serve as its inspiration, it is earnest. It is clear the people who made The Disaster Artist respect Wiseau. Yes, he is presented as the bizarre person he is in real life, but he is also presented as a person who was genuinely inspired and who wanted to create his art.

When the moment finally came for his to show the world what he was capable of, they responded with laughter in a scene that showed genuine heart as he storms out of the theater. It is in the lobby where he has to be consoled by his friend Greg (Dave Franco) that the meaning behind the film is portrayed to everyone: The Room is bad, but it is also something that people love. It is something that over time has created a more loyal fan base than some of the most lauded films in the years following its release. There are a number of films that have won all kinds of awards in the past 15 years that have the sort of fervent support that The Room has earned- does anyone even remember The Artist?

Yes, people are laughing at it, but they are having some of the most fun they have ever had while watching a film. Tommy Wiseau has achieved the American Dream, and his impact on the industry is greater than anyone could have ever predicted. While his film may be horrible, and the process may have been a disaster, there is no doubt that The Room is one of the greatest success stories in modern U.S. cinema.