The most wonderful time of the year is here at last. It the time of the year where we can all gather with our friends and loved ones and forget about all the strife and challenges that exist in the world and within our individual lives and take some time to acknowledge, and to be thankful for what is truly important in our lives: the continuing efforts of Disney to form a media empire which will control all of our lives. So while the house of mouse continues its imperial march towards a Paramount Decree like Sideshow Bob towards so many rakes, we get to enjoy some quality time with the capital ship of its world conquering fleet, Star Wars.

For the third year in a row we get to enjoy a new Star Wars film with the second instalment of the new trilogy, Star Wars: The Last Jedi, and you know, it’s pretty good.

The greatest problem holding back The Last Jedi is that after the initial viewing wears off, the reality of the film sets in and the realization of what the film is sets in; this film is a finely tuned corporate product. Looking back, nearly every aspect of the film feels like it fits into a nice little box to be checked by an executive’s fancy pen. The fact that there was a team of suits overseeing the production of this film is apparent from the opening scene. We start with the First Order having cornered the rebels in the wake of the apparently feckless Republic falling apart in the wake of the Death Star surrogate seen in The Force Awakens. In the face of this threat, the rebels utilize a counter attack lead by Poe Dameron who stalls for time by speaking directly with General Hux, the leader of the First Order fleet.

What could have been a perfect moment to establish a key antagonist of the series as he confronts a major player within the rebel ranks with both players thinking they are one step ahead, is instead played out for laughs and conditions the audience to not take one of the main antagonists seriously. This moment came across as though it was decided by a team of people making sure that the villain didn’t end up being too scary for the kiddos.

As bad as that opening corporate moment was, there is one that, while smaller, is much worse due to when it occurs and what it breaks up. When Rey and Luke have their first real moment of interaction- when Luke finally decides to drop his guard and inquire as to why Rey has sought him out, he asks her repeatedly who she is and where she is from. She continues to say that she is nobody from nowhere, but he continues to press her until she finally reveals that she is form Jakku. Up to this moment, this was a fairly tense scene; it is clear that Luke has gotten more closed off and surly as the years have gone by, as such his continued prodding of Rey feels almost confrontational. Quick editing on top of Luke’s tone amplify the tension in the scene as Rey continues to be pushed back onto her heals in front of this wizened Jedi master.

Having a good scene on their hands, the folks at Disney decided to ruin it with a single line. Once Rey finally reveals that she is from Jakku, Mark Hamill completely drops character to make a joke, saying something along the lines of, “Oh wow, you really are from nowhere.” The scene stopped for a joke. The entire film stopped in order to kill the energy in a key scene between two key characters for a freaking sitcom joke. I was waiting for the laugh track after Hamill dropped that line. This one scene, this one singular moment in the film encapsulates not only this film, but the other two Star Wars films that Disney has released. 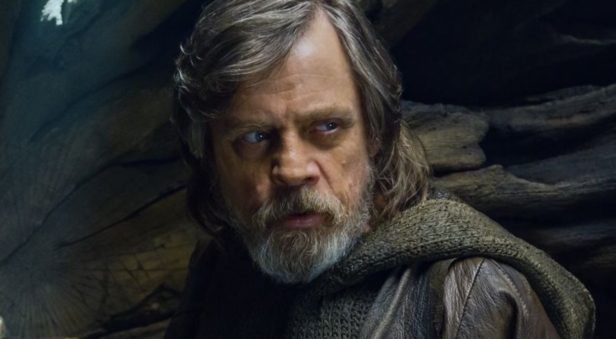 Here we get a exclusive look into Luke Skywalker waiting for the laugh track before he can say his next line.

Somewhere on set there is some robotic corporate hack complaining that it has been too long since the last joke, so they have to work in a new one- no matter how inappropriate it is. Because this is not a real film. It is just another product that Disney puts out. “If we don’t treat the villain like a cartoon, he might develop into a real character that would scare the kiddos. If we don’t shove a joke into the film every five minutes then audiences might think it is a real film and get bored!”

The film is not without its merits, however. There are two scenes where there is clear artistic vision involved with their execution, and as a result, can stack up with originals. The first comes when Rey is on the Luke’s Island, and being somewhat tempted by the dark side within the island and the answers it teases, delves into hidden cave beneath the waves to find a reflective wall. Once she touches the wall she becomes stuck in this sort of infinite image as if she were standing between two mirrors. It is an interesting visual complete with plenty of quiet time to let the strangeness of the situation sink in for the audience. Rey overcomes this infinite void to find the end only to see that the answers she seeks are not there.

A second occurs a near the first climax of the film. Having caught back up to what remains of the rebel fleet, the First Order closes in to wipe out the rebels. While the entirety minus one of the rebels flee to a nearby planet via small craft, the First Order begins to open fire, decimating the defenseless small vessels. Vice Admiral Holdo, played very well by Laura Dern, turns the last remaining flagship in the rebel fleet towards to First Order fleet and charges into it at light speed. The devastation and destruction this maneuver creates to the First Order fleet is incredible, and once again, we get some quite time to let it sink in. The massive capital ship of the First Order is cut in half with many other ships receiving similar damage showcased in a series of clean, black and white nearly still images that were the only proper way to capture the gravity of Holdo’s decision. It was stunning, it was artistic, and it was the most satisfying moment in the film.

In terms of good characters, there are two: the aged Luke Skywalker, and everyone’s favorite tantrum throwing Sith, Kylo Ren. The new Luke Skywalker is older and almost bitter towards the Jedi. His views of them have been conditioned by years of solitude that have given him ample time to consider all of their flaws. He now states that the Jedi were fools whose hubris brought about their own demise, and even cut himself off from the force so as to not make more of those mistakes. This vantage point is not only very interesting for his character, but for the series as a whole, as the Jedi have never really been questioned in terms of their wisdom or intention. To hear Luke Skywalker challenge the notion of a Jedi opens the way for more interpolations of the Jedi and the force. Also, he was able to effectively summarize the entirety of the prequel trilogy in a few sentences which was more than they deserved. Finally, his explanation of the force to Rey was also one of the highlights to the film, as it was one of the few times we get a real moment of characterization within the film. 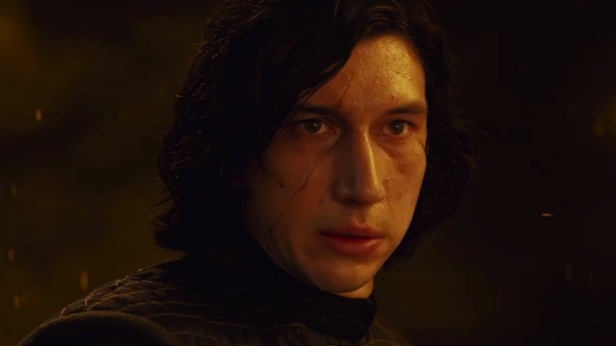 Kylo Ren is the only new character who can stand up to the originals in terms of memorability and complexity.

Most other moments of characterization are reserved for Kylo Ren. His is the most interesting new character in these films by far, as his massive ambition for himself and for the entire galaxy is tempered by his childishness and lack of maturity which he cannot grow out of. Even when he has the rebels trapped and ready to be effectively executed, he gets distracted by a visage of Luke that he must kill. Ren is the new character with the most complexity, and most development within the two films which brings up the final singular issue with this film: Time.

At over two and a half hours, this film is too long. Earlier I mentioned a great scene that culminated in the first climax of the film. That is because that scene felt as though it was the natural ending of the film; all of the events had culminated to that moment which also included a confrontation between Rey, Kylo Ren, and Snoke that come to its conclusion at the same time. The rebels had escaped, Snoke was dead (spoiler alert, that character sucks) and Rey and Ren had set the stage for their ultimate clash in the final part of the trilogy. Unfortunately the film kept going for what felt like an entire fourth act that was nothing more than a rehashed Battle of Hoth.

This film, and its predecessor to a lesser extent don’t make good use of their time, as these films are paradoxically too long, yet they don’t have enough time. So many of the important characters are separated from each other that we have no time to develop them. The film has to be divided into half a dozen sections with certain characters all engaging in their own plotline separate from the others; there is not time in which all the key players are in the same place engaging in a singular challenge. The very first Star Wars film gave us a quiet moment on board the Millennium Falcon for Han Solo, Luke Skywalker and Obi Wan Kenobi to all spend time together and for them to develop as characters. In these new films, Rey and Poe Dameron, two of the most important characters in the new trilogy, met for the first time in the closing minutes of the second film. Kylo Ren is the only new character which has undergone anything close to resembling growth, as all others are one dimensional robots masquerading as characters.

When looking at this film from far away, it looks exactly how a Star Wars film is supposed to look. It has all the bells and whistles and lightsaber noises that it needs, and it plays out with no major aspects inhibiting the enjoyment of the film. But once you get closer, and actually get your hands on it and inspect it, you realize that it is not how a Star Wars film is supposed to be. It is too glossy and too shiny to be a genuine Star Wars film. There are still imperfections in it that give away the fact that it was manufactured to appeal to as many people as possible. The Star Wars series is fairly notorious for its merchandising that spun off the original films, and these new ones have even become merchandising themselves. No longer are these the result of an artistic vision carried out by a small number of people seeking to create something memorable to the best of their abilities. Instead, these new Star Wars films are products- something to be bought, played around with for a little bit, and then disposed of in time for the next product to roll off the line. The Last Jedi is a film that has no integrity, and no soul, as it is a shiny but hollow, mass produced product that will never be able to live up to what was made with genuine passion.