A fairly strong July finishes with a pair of films that could not be further apart. On one hand, there is The Emoji Movie which, based on the review scores from the weekend, is as close to a cinematic train wreck as is physically possible. On the other hand, we have Atomic Blonde, a very competent and solid action-spy thriller starring Charlize Theron.

The film fared pretty well at the box office with an $18 million opening weekend while going up against an animated clusterf—err… I mean family film and Dunkirk, one of the most critically lauded films of the year. Considering that it is an R rated action film with a relatively modest budget of $30 million, it has been a moderate success. However, one has to worry if this film will be forgotten about before too long.

Atomic Blonde is not a film that has a deluge of glaring weaknesses. It is a fine film that is sure to entertain a vast majority of those who decide to go see it. Its strength lies in its fight choreography. Being directed by a former stuntman and coordinator, it makes perfect sense for this aspect of the film to shine above most other elements. Most of the fights are meant to appear to be done in one continuous take with sneaky edits being thrown in when someone passes in front of the camera (that’s the tell in every film, not just this one). The fights are intense, bloody, and each strike feels like it carries proper weight to it. This is not a case where our heroine can take endless punishment and dispose of her attackers/targets swiftly. Each engagement feels like our heroes life is on the line. The weight given to the fights gives them a real sense of satisfaction upon their conclusions beyond the fact that they look cool.

Charlize Theron dishes out just the right amount of pain and concussions.

Another strong characteristic of the film lies in its setting. Taking place in late 80’s Berlin, the film has an extremely distinctive style; it is steeped in 80’s culture and music with prolific cigarette consumption straight out of the 50’s. Each of the main characters is overflowing with personality, and when placed in this distinct environment, produces a final product that is just damn cool. Some of the side characters aren’t as developed-particularly the suits who are giving the orders. The most memorable thing about John Goodman in the film was the impressive amount of weight he has lost- which has nothing to do with his character. Like a couple of others, he is there to advancer the plot at key points and pass off some expository dialogue.

The setting and visual style of the film gives off a major Nicolas Winding Refn vibe. The color pallet is fairly monotone with lots of blues, whites, and greys dominating the screen alongside ample amounts of neon. This visual style felt very reminiscent of Only God Forgives or The Neon Demon. One thing that was different was the music. While Refn has made use of 80’s sounds, Atomic Blonde straight up uses 80’s music- and lots of it. There are countless pop songs from the 80’s that set the tone of the film nicely. Further, much of the action coincides with the beats of the songs, resulting in the fight scenes having a fast paced, and upbeat style to them. This seems to be a trend that is picking up steam, as Baby Driver did something similar, matching the beats of the songs to the peaks and valleys of the car chases.

The film’s strengths are very solid, and while it definitely has weaknesses, they don’t stand out enough to detract from the experience.

The weakest element of the film lies in the narrative. It is very straight forward, and without all of the personality of the characters and settings, feels a lot like something that we have all seen 1000 times. It is a fairly generic espionage plot. The Ruskies have a piece of information that the good guys need, and a super spy is sent in to get it back. That is about it for about 90% of the film, though there is a nice twist at the end of the film that at least attempts to subvert its obvious trajectory. The only issue is that it happens very quickly, and that it doesn’t quite have enough consequence to it. At least they did something. The film certainly does not try to bring a new take on the genre via the narrative; it more so serves as the structure for the cool characters to engage in cool action scenes.

And speaking of those characters, while they are certainly cool – with Theron’s being particularly bad-ass – they are pretty one dimensional. This film is not interested in exploring the psyche of our heroine as she is on her mission in a way that Skyfall did for James Bond. Similarly, the other two main characters in the film played by James McAvoy and Sofia Boutella are very distinct and oozing with style, yet they don’t really have a lot of growth or change throughout the film. The only major changes come about as a result of the details of the plot unfolding with the characters for the most part going down predictable paths. 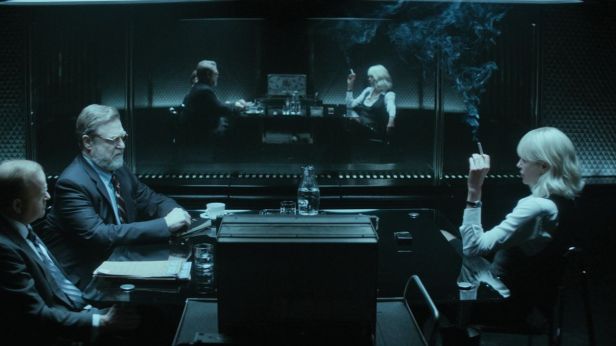 Theron may cool as hell and the star of the show, but check out how great John Goodman looks!

As stated earlier, these shortcomings don’t detract from the film. The main purpose of seeing this film is to watch Charlize Theron kick a bunch of ass, and to that end, the film delivers. Character development and an interesting plot are always a bonus in these types of films. However, those weaknesses still have an effect on the film. Although there are unlikely to inhibit anyone’s enjoyment of film while viewing it, they don’t exactly add to a desire for repeat viewings, and that is where I think this film suffers and why it could end up being somewhat forgotten. Anybody remember The Italian Job, King Arthur, Miami Vice, Speed Racer, or any film that Nicholas Cage has been in for the past 15 years? These are all above average films that did some things well, but ultimately did not move the needle enough to be memorable. Does Atomic Blonde do enough to differentiate itself and end up a little more like John Wick, or will it fade into obscurity like those other films? The answer will take time to manifest itself, but unfortunately for Atomic Blonde, it may not quite do enough to have secured a definitive ‘yes’ for itself.