The midway point of the summer movie season is here, and with it has come a strong contender for the best film of the entire summer.

Baby Driver, the latest film from Edgar Wright, is not only the best film of this summer, but it is the best summer movie since Mad Max: Fury Road back in May of 2015. It has the rare combination fun and exciting action sequences without having to sacrifice character and plot development which gives it all of the necessary pieces to be a perfect summer movie.

Baby Driver follows the titular Baby, a getaway driver who is coerced into taking part in various heists and robberies as payback for stealing the car of a criminal mastermind. He doesn’t take part in the robberies, instead remaining in the car jamming out to his music before engaging in thrilling escapes form the police.

It is clear early on how much personality there is not only in the protagonist, but in the film in general. One of the most distinct aspects of the film that stands out is the sound track, and how it is used within the film. As a child, Baby was involved in a car accident that killed his parents and left him with a ringing in his ear that he drowns out with music. This results in him having music playing constantly, and him having his earbuds in for most of the film. Fortunately, the audience is privy to what he is listening to, and that music sets the tone for the escape sequences with the beats often dictating the pace of what is playing out on screen. 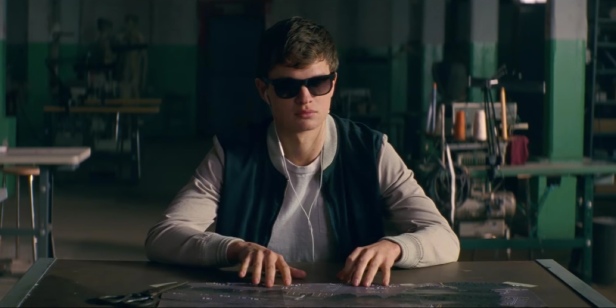 Baby is the perfect lead for this film as an aficionado of both music and sunglasses.

A small touch that goes a long way towards adding value to the film is how the earbuds are treated. At any point that Baby only has one of them in, the music will cut out from one half of the theater, mimicking the same stereo sound that Baby is experiencing. This is just one of many details that gives this film a level of polish and presentation that many other films lack.

Details are nice, but without the meat and bones of a film, they have nothing to service. Baby Driver provides the meat of this type of film in spades. The car chases are thrilling sequences that are dictated by the rhythm of the music. The choreography and pacing of these action sequences are nearly spotless, and they keep the heart pounding until their conclusion. There are three major car chase sequences in the film, and all three have their own feel and character to them to keep them from getting stale or dull.

The car chases in this film are some of the best of the past few years.

In between the car chases comes the other key to the film; time for the characters to develop, and for the audience to get to know them. Aside from a few of the criminal character having small roles that only show up one time, the main characters are feel distinct, and their motivations are for the most part logical and clear. The only exception is Debora. She is critical in getting Baby out of the life of a getaway driver, but here character does not have quite enough time on screen for the audience to really get to know her. While she is important for Baby’s character arc, she does not have quite enough of her own.

The only other character issue that came up in the film involved the actions of Buddy and Darling. They are involved with the first heist and the third in the film. Throughout the first heist and into the third one, they both seem to have a nice relationship with Baby, as they are both downright friendly with hi. However, once it is revealed that Baby has been recording conversations during each heist (for the purposes of making some funky music of this own) they are very quick to turn on him. While they are criminals, and they have killed people in the film, this turn felt a little quick based on how they have behaved in relation to Baby earlier in the film.

Both of those character criticisms are extreme nitpicks. This film has very few flaws, hence why it is potentially a perfect summer movie. In order to be a perfect summer movie, the movie has to be able to provide all of the fun and excitement that is expected of the big summer blockbusters, but it cannot do that at the expense of character development and logic that many films are often guilty of. (Looking at you, Transformers) This film is strong in both departments; not only does it have some of the most exciting action sequences without resorting to smorgasbord of CG, but it does so with strong characters that we care about, and that we want to see succeed or fail.

As he has done in the past, Edgar Wright delivers a movie that is just damn good. Shaun of the Dead, Hot Fuzz, The World’s End, and Scott Pilgrim vs. the World all proved that Wright is a filmmaker who knows how to put together a high quality film. They are extremely well made with attention going to everything from the smallest bits of sound design to the most complex action choreography imaginable. These films will never compete for Academy Awards, but that does not mean that they have any less value or credibility. Simply put, Baby Driver is an endlessly entertaining film of the highest quality that stand as one of the best summer movies in a long time.