Alien 3, and Alien: Resurrection are the result of someone not paying attention to the closing statement of Part 1.

There is a substantial drop in quality from the first two films to the second two which also coincides with the lengthy hiatus that followed Alien: Resurrection before Prometheus decided to retcon the entire series.

Let’s not get too far ahead of ourselves though; first we have to take a look the low point of the entire franchise, beginning with Alien 3.

The reputation of Alien 3, by many accounts, is not deserved. Alien 3 is the classic tale of a film production being poisoned by studio meddling. After reading several articles for this feature, and seeing each one mention this turmoil, it is something that has defined this film over the years almost as much as the final product has. Script rewrites the extended into the actual shooting of the film, and studio executives interfering in the day to day operations of the film seem to be the biggest culprits behind damaging the film.

The interference definitely shows throughout the film. Many of the characters feel one dimensional, and even the ones that aren’t fail to be as memorable as most characters from the previous two films. Ultimately they are criminals; even if they are attempting to seek redemption through their own religious system, they are still criminals that don’t do enough to make the audience care about them. Outside of Ripley and one or two of the prisoners, the characters have little personality or backstory, so they inspire little reaction from the audience as they are picked off by the Xenomorph.

A quick note about the aforementioned Xenomorph, this one is a little interesting as it is born out of a dog instead of a human, which gives it a little different look. Once again, this is a sign that this film wanted to make itself more distinct and that it had interesting ideas to it. Despite this, the early CG used for the creature and its first person segments have not aged well- they are no Jurassic Park– but it does allow for a chest burster scene that is even more unnerving and unsettling than the original.

The lack of quality characters is the greatest weakness in the film. Despite only being onscreen for about five minutes, Bishop was far more interesting than 90% of the other characters in the film. The other major flaw is that the film falls into many of the trappings and story beats of the first two. Especially in the back half of the film. This is a flaw in the franchise that it cannot escape. No matter how they try to do it differently, all the changes amount to is the same ending sequences wearing a different pair of shoes.

More important than the film’s shortcomings are the things that it does well. In going back to a single xenomorph, the film returns to a style more akin to Alien than Aliens. AS a result, it has much of the same moodiness, and tension of the first film. The decrepit refinery that serves as the films setting fits in the world that Ridley Scott had established back in the 70’s.

Ultimately the strength of the film is again with Ripley. Where Aliens left off, Ripley was at a relative high point. Yes she had just gone through another hellish nightmare due to the insistence of a corporation to weaponize a monster at the expense of the people it sends in to retrieve it. And yeah, she had just witnessed many people being killed, but that just means that she should be used to it by Alien 3. More importantly, she believes that she is heading back home with two and a half people still that are about to become very important parts of her life going forward. Unfortunately for her, two of them will be unceremoniously killed in the opening credits of Alien 3, while Bishop prefers to be permanently shut down rather than live a life where he can never return to his previous condition. 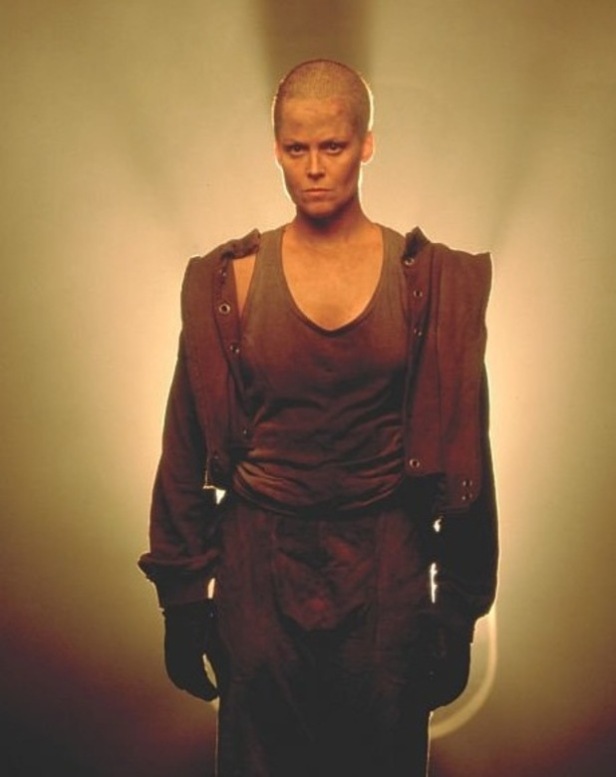 This version of Ripley is definitely not someone to be f***** with.

These tragedies in Ripley’s life begin to mount by the time she awakens in Alien 3 and she responds by focusing on saving herself. As Scout Tafoya states in an article for rogerebert.com, “In ‘Alien 3,’ Ripley is fighting for Ripley, period. She has to. Nobody else will fight for her. She’s been betrayed and abandoned by everyone and everything she ever valued. She’s shattered by grief, staring numbly out at a universe that barely seems worth saving. She has allies but no protectors—nor, it seems, does she expect any, not after enduring so much suffering en route to this hellhole.” This is the final evolution for Ripley’s character; in the first film she was simultaneously the hero and the damsel in distress, and in Aliens, she is more of a warrior fighting to protect others. But in Alien 3, the tragedies mount to the point where she only has herself to look out for by the end of the film. With that in mind she decides it is better to kill herself and the Xenomorph queen inside her, rather than allowing the Weyland corporation to get their hands on it.

With all of the trouble with the production of the film that impacted the final product, Alien 3 is more fondly remembered as a film that brought some different and quality ideas to the franchise in spite of all of the interference from the outside. It certainly has its fair share of flaws that keep it bellow the first two, but it is by no means the low point in the franchise.

Alien: Resurrection is the low point in the franchise.

In order to keep things from getting stale, the fourth entry in the franchise needed something fresh. Rather than going to a different setting, with a completely new protagonist, the decision was made to bring Ripley back. When we last saw her, she was tossing herself into an inferno while clutching a queen which had burst through her chest. These monsters, along with some help from the Weyland Corporation, completely ruined her life, so she decided to stick to both of them as her last act. It was a solemn end to the character, and considering what she went through, the appropriate place to let her rest.

Actually, screw that. It would be a far better idea to resurrect her, give her some D.N.A. from the Xenomorphs and make her into a completely different character- one that is really good at basketball!

Whatever Sigourney Weaver is playing in Alien: Resurrection, it sure as hell isnot Ellen Ripley. It was some silly character that displayed sympathy throughout the film for the very creatures which had destroyed the life of her original self. To make everything worse, she felt remorse for having to kill that abomination at the end of the film.

The worst sin committed by this film is what it did to Ripley. The development that had taken place over the three previous films was all but erased by the decision to give her sympathy for the Xenomorphs. Ellen Ripley is one of the most iconic characters in Hollywood; she was the first mainstream female action hero, and as brought up in Part 1, she is acknowledged as one of the greatest heroes of all time by the American Film institute. But the character that appears in Alien: Resurrection, is not Ripley and does not deserve to be called Ripley.

As poor as this film is at times, there is one idea that could have been the basis of a solid fourth iteration to the franchise. The film opens onboard another spaceship which successfully retrieves the cloned queen from cloned Ripley. Using this queen, the military leaders on board the ship were finally able to achieve a goal that had alluded them for the three previous films: they had gotten their hands on the Xenomoprphs. And much to no one’s surprise, they escaped. This should have been the basis for the fourth film. Maybe have the creatures be genetically modified to increase their threat, but the point remains that watching a bunch of Xenomorphs terrorize a military facility leaving a few people to try to kill them off. What? You think that sounds identical to Aliens? Haven’t you been paying attention? This entire franchise is essentially the first film remade with different coat of paint, so just remake Aliens, it would be fine. Well, mostly fine.

Returning to what this film totally screwed up, one has to wonder how different it would have been if it had a different director. Jean- Pierre Jeunet is undoubtedly a skilled director, one must only watch the film he made after Alien: Resurrection, Amélie, to understand that. But that does not mean that he was the correct choice to film an Alien film. His style tends to dominate the images of the film, and it is not one that works for the Alien franchise.

The first three Alien films are defined in part by the style of their environments and colors. The environments are very industrial, and the colors are stark and washed out. But in Alien: Resurrection, the colors are very bold and, while the environments also have an industrial feel, they are a little bland, which does little to add to the atmosphere of the film. On top of all that, the style further dominates with odd camera angles and lenses which distort the images on screen which do not fit the style of the Alien films. This is not to say that there can be no new style in the Alien films, of course there can be. The key is that it has to work, and this one did not work in this instance.

While there is definitely more to get to such as how poor these characters are, similar to Alien 3, but we would be remiss if we ended this with anything other than the Xenomorph-Human hybrid that served as the antagonist of the final act of the film. My goodness, this thing is terrible.

First of all, its design does not inspire any fear, for how are we supposed to fear something that can’t even turn its head? Second, and what is actually the most important aspect of its design flaw is that it has eyes. H.R. Geiger, designer of the Xenomorph, left out the eyes intentionally as described here, “Giger deliberately gave the Xenomorph no obvious eyes as he thought it made the alien more frightening if you didn’t know where its looking.” And it sure as heck did look frightening, unlike the creature from Alien: Ressurection, which looks goofy. Fortunately, it’s half human form didn’t keep it from begin killed in the same way that almost every Xenomorph has been killed off at the conclusion of the film; it was thrown into space.

After the disappointment of Alien: Resurrection in 1997, the franchise would go on a prolonged break before being resurre— err… brought back for 2012’s Prometheus. But until then, the franchise would sit idle with a .500 batting average, and with the final impression it left audiences with being the worst film in the entire franchise. Fortunately, there would be clearer, if not slightly more confusing skies ahead in Part 3.