Alien: Covenant continues the ongoing trend of  being another installment to the Alien franchise that is not able to live up to the first two films.

Alien: Covenant (Covenant) begins on the colony ship Covenant as they travel towards their new home. Along the way, a solar flare damages their ship and forces the crew to wake from cryo-sleep in order to make repairs. It is during this repair process that they pick up a strange signal. The crew then follows this signal to its source and decides to change up their original plans and to land on this new planet and assess it as a possible location for their colony. But then things go haywire, and an Alien movie breaks out.

In Prometheus, the hostile entity was in the form of a black goop that could turn little worms into big worms, normal men into weird monster-zombie-men and it allows sterile women to give birth to giant squids. This time around, it is far more sophisticated, as it instead takes the form of a fungus spore that can enter someone’s body without them even realizing they have been exposed. Two of the crew members fall victim to this hostile fungus while exploring the planet’s surface which leads to a pair of proto-xenomorphs emerging from their bodies. 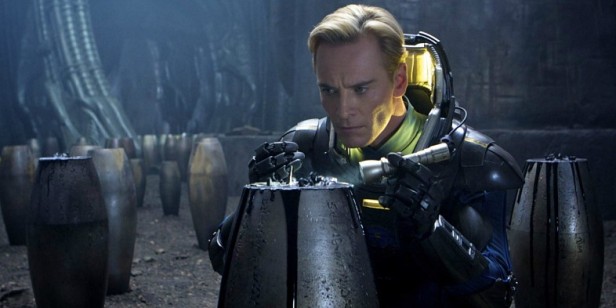 David messing with the black goop from Prometheus.

It is at this moment that the real focus of this film and Prometheus emerges: David. It is revealed in Prometheus that David had been working for Mr. Weyland while on the exposition as Weyland was hoping that the “engineers,” would be able to make him young again, or prolong his life, or something else along those lines. Instead, he gets beaten to death with David’s head. Fast forward to Covenant, and David is sporting a rebuilt body complete with a new haircut as he saves the survivors of the initial alien encounter and leads them to his home. Once there, it is revealed that David has lived on that world for a decade and has been trying to do something he was never intended to do, create. It is also at this point that the audience realizes that the real star and purpose of these two films is to tell the story of David and his journey to create a perfect life form.

In terms of what to expect from an Alien movie, Covenant delivers. And by delivers, it follows the formula that has been very well established by now. Xenomorph shows up, a confrontation occurs, characters think that they have survived, they go to a different ship or location, low and behold Xenomorph is not dead, final confrontation occurs where Xenomorph is thrown into space with bonus points being scored if construction equipment is used. To that end the film does a good job. The effects look solid, the action is fun and tense, and there is a fine payoff. The problem is that all of this happens in the back third of the film. The first two Alien films (a.k.a. the good ones) take this plot line and stretch it out over an entire film which allows the audience to experience all of the tension alongside the characters so that the final payoff is earned and desired. With Covenant, it had to spend too much time setting up other plot lines and too much time fleshing out the role that David plays in this universe.

The greatest flaw to this is the fact that the twist ending can be seen coming from a mile away. In addition to playing David, Michael Fassbender plays Walter, a newer model android/synthetic human who serves on the covenant ship. David and Walter have several interactions throughout the film which are used to explain David’s core motives before the two have a physical confrontation as the remaining crew try to flee the planet and return to the ship. We see Walter join them as he appears to have defeated David, but it is revealed at the very end that it has in fact been David the whole time in a mild twist that most people anticipated!

The importance of David not only to this film, but to the larger Alien universe in general puts a strain on the series. According to Covenant, he is the one who made the Xenomorphs, or at least played a direct hand in their evolution to what they would become in Alien. This simultaneously places an undue burden on the continuity of the franchise as a whole, and also muddies the message with this new mythological and even biblical origins of the Xenomorph. Part of the beauty of Alien is that the Xenomorph was essentially just a monster; it was a ruthless killing machine. Alien’s added some more to the creature with the addition of the queen, but the nature of the Xenomorph remained intact. Covenant ret-cons the Xenomorph into something that was created for the sole purpose of being perfect, and not something that has evolved into what it is after millennia of trial and error.

Like Prometheus, Alien Covenant is a fine film. Either on their own, or as a pair, the two films are made well, feature talented actors and are able to deliver some fun and thrilling moments. Unfortunately they aren’t allowed to stand on their own, as they have to be shoehorned into the Alien franchise, which seems to come at the detriment of both films. If these were allowed to exist on their own, with their own mythology and creatures, then they have the potential to be very enjoyable and high quality films. But having to force the Xenomorph into the films and make things comply with the Alien franchise obfuscates the message and detracts from the film, resulting in a good, but not great final product.

One thought on “Alien: Covenant Review”